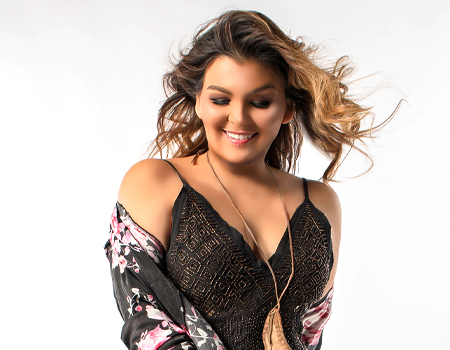 Crystal Shawanda is a Canadian blues and country music artist. CMT documented her rise to fame in the six-part series Crystal: Living the Dream, which was broadcast in February 2008. Signed to RCA Nashville in 2007, she released her first single, "You Can Let Go", in Canada in January 2008. As she once told an interviewer, “The whole time I was singing Patsy Cline on stage, I was singing Etta James at home.”

Her new album Church House Blues reflects that dedication and devotion and finds her co-writing seven of the ten songs on the album. Produced by her husband, collaborator and cowriter Dewayne Strobel, it not only marks her fourth blues effort to date, but one of her most demonstrative as well.

Most importantly, Crystal says that the recording allowed her to express herself without feeling like anyone was looking over her shoulder. “This is the most I’ve ever loved an album out of everything I’ve ever done,” she insists. “This is really who I am. It’s my most definitive album yet. All these songs reflect different aspects of who I am. It’s putting a finger on that definitively. I’m not trying to prove anything. I’m just being me. I’m done with trying to fit in.”

The critics all agree. “Shawanda is a real deal blues artist who isn’t dabbling in blues so much as channeling it,” Steven Ovadia wrote in Elmore Magazine. JD Nash of American Blues Scene raved, “Not only does Shawanda capture KoKo Taylor’s southside growl, but after a brief slow down for breath, morphs into a primal scream that would grab Janis Joplin by the shorthairs.” Bill Wilson, writing in Reflections in Blue, concurred. “Crystal Shawanda is every bit the real deal. This is an incredibly powerful piece of work.”

Still, Crystal is hardly what one might call an overnight sensation. “I grew up with blues music and I used to jam with blues musicians when I was still living in Canada,” she recalls. “It’s funny. After moving to Nashville the second time in 2000, I was discovered while actually playing the blues —the music made by Muddy Waters, B.B. King, Big Mama Thornton, Janis Joplin. But when I was offered the record deal to make country music, it felt like the opportunity of a lifetime, and so I took it and ran.”

She followed her stint at RCA with an independent effort Just Like You, garnering Canada’s prestigious Juno Award in the process. She also had the distinction of performing at President Barrack Obama’s inauguration festivities in 2013. She’s since made her name as a motivational speaker and currently serves as board member of the not-for-profit Nike 7 charitable foundation.