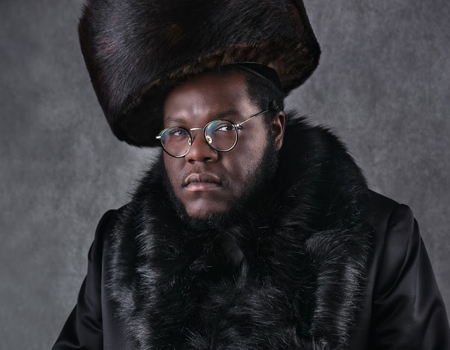 Nissim Black has been a gangsta rapper, a gang member, and a faith seeker. But it is his current incarnation that is here to stay: an African American Hasidic Jew who brings sharp beats and hook-filled rhymes to the masses. The first single of 2020, “Mothaland Bounce” is a confluence of everything he’s ever done, and everywhere he’s ever been. The vibe is old school, but the song is thoroughly fresh, pairing big beats, an African hook, and a catchy chorus with a video that has already garnered 4 million views on YouTube.

With “Best Friend,” his latest single, and other new tracks, Black has reset his sound to better reflect his past and his present. “’Best Friend’ is a love song to music itself which does so much for the Human soul. We fall in love with music before we know how to speak, it befriends all of us at an early age.” Black says. “Through life’s ups and downs it always has the right tune or words to comfort us.”

The new tunes feature Black’s melodic singing mixed with silky smooth beats and his nimble verbal sparring; Black’s music has always leaned heavily on melody, but he had to wait for hip hop to catch up. After a long discovery process, both musically and personally, Black has finally found his true identity. “All of those journeys—being in a gang, being on the football team was a part of me trying to say, ‘I belong to something greater than myself, I don’t know where, but I belong somewhere,’” he says. “It’s almost like trying to find that home.”

Special Guest: Kosha Dillz, born Rami Matan Even-Esh, is an NYC-based Edison, New Jersey-born rapper that raps in a style called "user-friendly". His 2020 pandemic street raps in NYC to the Asbury Park boardwalk have landed him millions of views in everything from Humans of New York to Worldstar to the NY Post to collaborations with EDM legend Kaskade (sexy), as well as releasing his latest 14 song album “Nobody Cares Except You.” He is fresh off playing Bottlerock Napa and his own Bald Fest, which landed on the Late Show with Stephen Colbert and page 3 of NY POST.  Dillz has shared stages at festivals with everyone from Mac Miller and Miley Cyrus to G Eazy to Portugal the Man, including the likes of Coachella (2019) , Bottlerock (2021) and South by Southwest (SXSW).

Starting out in the underground rap stages of NYC he battled his way to winning record deals at Giants Stadium and found himself opening for Eminem in 2010. In his formative years' post-battle circuits, Dillz began showing up to Wu-Tang shows to rap for the Rza who was convinced Dillz deserved a chance. While it took him a few years to earn his own set, Kosha managed to alternate between guest appearances with Rza and Matisyahu in front of thousands of people on their world tours as well as lay down his most popular collaborations with them. When asked why they supported Kosha so much in their interviews, the artists' both responded that "he kept showing up and they had no choice." After Rza invited Kosha Dillz to the BET cypher, Kosha became the first rapper to perform in Hebrew on BET, and also earned the chance to battle the late DMX outside after the initial cipher recording. It was an unexplainable moment in history after DMX's unfortunate passing this year. Since then,  Dillz has incorporated much of his heritage into his music, rapping in multiple languages from Hebrew and Spanish to even some Yiddish.

After years of guest appearances and hustle around the world from Red Rocks to Jerusalem to Coachella, a Billboard charting album, a Bud Light Super Bowl ad, and even a playable video game character in the NBA 2k video game series, Dillz has finally arrived to touch the stage at Penn State for the first time in many years.

“Ex-gangster rapper Nissim Black or D-Black has embraced orthodox Judaisam and has now
changed his music to fit his new lifestyle.”
-BBC

“...The message of Nissim Baruch Black’s music has been one of hope and redemption"
-The Guardian