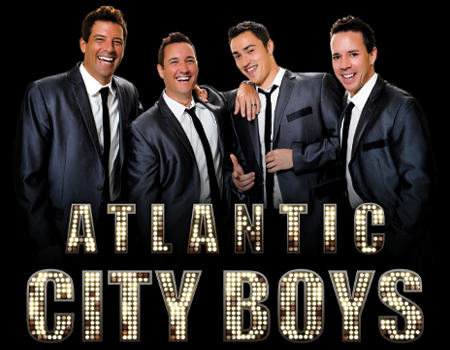 The Atlantic City Boys are four dynamic lead singers who have wowed audiences in Las Vegas, Walt Disney World and, of course, Atlantic City! Now they lend their world-class vocals to the rock-n-roll harmonies of the 60s, singing the hits of The Drifters, The Beach Boys and Frankie Valli and the Four Seasons.
For years, one of the most popular vocal groups worldwide has been Frankie Valli and the Four Seasons. The story of this group has even been made into an exciting Broadway play called Jersey Boys.
The Atlantic City Boys show is a tribute to them and several of the other classic vocal groups. The show is presented with personality, charm and great vocal talent.
Boca Black Box Center for the Arts
8221 Glades Road #10 Boca Raton, FL 33434
Phone: 561.483.9036 / Fax: 561.451.2456
Email: bocablackbox@gmail.com
Lake Park Black Box Center for the Arts @ The Kelsey Theater
700 Park Ave, Lake Park, FL 33403
Phone: 561.328.7481
Email: lakeparkblackbox@gmail.com