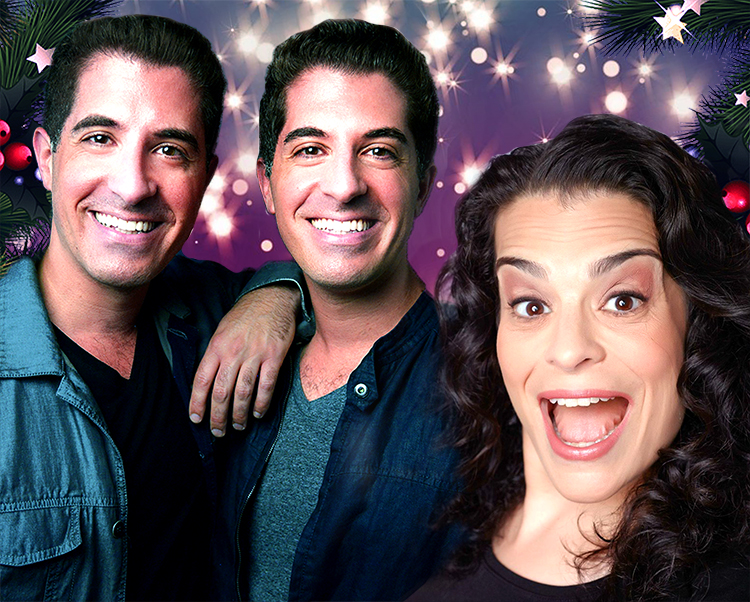 Nunziata joins Comedy Central comedian Jessica Kirson for a night of music and comedy like you've never experienced before. Jessica is the nationally touring tour-de-force comedian who has appeared on The Tonight Show with Jimmy Fallon, The View, HBO's Crashing and recently featured in the movie The Comedian with Robert DeNiro. And she just finished
taping her one-hour Comedy Central Special that will be premiering soon. Will and Anthony bring their trademark lyrical tenor voices and two-part harmonies to Christmas classics, Italian songs as well as hits from Frank Sinatra, Frankie Valli and beyond. The brothers are all-around entertainers trained in improv comedy at the Upright Citizens Brigade in New York City. And you can catch Anthony in the new Netflix comedy The Last Laugh opposite Chevy Chase and Richard Dreyfuss.

Bring your friends, bring the family!

“The Italian Jewish Christmas Show!” will make you realize just how crazy your family is during the Holidays! And tonight, we're all family!

Will & Anthony Nunziata are internationally-acclaimed singers, songwriters and all-around entertainers. The brothers has performed over 400 concerts over the past few years headlining major performing
arts centers, theaters, and symphony concert halls across the country and around the world. They recently appeared in the Netflix film "The Last Laugh" opposite Chevy Chase and Richard Dreyfuss. The Brooklyn-born, classically trained singers are hailed by Broadwayworld as “an explosion of entertainment!” They recently headlined Carnegie Hall for two sold-out concerts with the New York Pops Symphony Orchestra. The brothers bring their distinct take on classic & contemporary songs as well as movie-bound original tunes to their live concerts. They have performed at private events across the United States and recently in England, Spain, Italy and Singapore. Will & Anthony studied music, acting and directing at Boston College, and trained in improv comedy at the famed Upright Citizens Brigade in New York City. www.willandanthony.com.

Jessica Kirson is a powerhouse on stage. Jessica’s act is a hilariously relatable performance of sheer silliness, vulnerability and ridiculous characters. Her countless comedic character videos have racked up over 30 million views on social media. As her friend Dave A`ell says, “I’d hate to follow her.” This year, Jessica will be featured playing herself on the HBO series Crashing with Pete Holmes. She recently served as a consultant, producer and writer as well as acted in the Robert De Niro’s film “The Comedian.” She has appeared on “The Tonight Show with Jimmy Fallon”, “The View, and “Kevin Can Wait.” She was recently awarded “Best Female Comic” by the MAC association in New York City and received the prestigious Nightlife Award for “Best Stand-up Comedian.” And in her spare time, Jessica is a regular contributor to the “Howard Stern Show” where she produces and stars in prank calls for the program. www.jessicakirson.com